Even before her descent from the marble pedestal Galatea was beautiful. Her features had been sculpted in the likeness of Aphrodite: fairest of all, and while Athene had breathed life into her, she had been blessed by the Graces and had the Muses Clio and Polyhymnia  bestow upon her their passions. And yet man, be he king, sculptor or lowly scribe is never satisfied, and though presented with his heart’s desire, the embodiment of a goddess, Pygmalion began to find faults in this woman; Faults he couldn’t believe had been present in his statue. He knew that like his creation this woman was delightful to behold, but he wouldn’t admit it to the world.  Instead he preferred to display an affectation of modesty all the while drawing his own eye to the ever-so-subtle changes between the living, breathing woman before him and his nostalgic remembrances of the cold forbidding statue he had spent so many months in creating.
The statuesque Galatea was no longer what he wanted: he saw her as flawed. Pygmalion wanted his dream, his statue, his goddess back. He wanted back the smooth and perfectly poised figure who remained with him always and steadily gazed at him through unblinking eyes. She, who was moulded to his beliefs, his desires, and his interpretations of beauty and her sex. But lightening does not strike twice in the same place, and so the blessings of the Gods are not again bestowed on those who sneered at the initial gift. Galatea, by all means as divine as men chose to call her, was indeed no match for a mere mortal; She could returned to her infinitely more appreciative sisters who graced Mount Olympus and the paradise of Mt Parnassus. As for the sculptor, well… his pedestal remained forever empty, for where a gift from the Gods is but shunned, no mere mortal can ever hope to succeed.
No comments:

Email ThisBlogThis!Share to TwitterShare to FacebookShare to Pinterest
Labels: Sketches

Glancing at the clock, the girl groaned inwardly and rolled onto her side. It was 3 am and the dull pain in her stomach was keeping her awake another night. It was a feeling she remembered too well: the introduction of a violent illness that had plagued her three months earlier and ruined her last days in Prague. She didn’t mind the aching nausea so much as the symptoms that had already visited her once today. She rolled over and glanced at the clock again. This time it read 03:04, causing another groan to escape into the room. This time it was as much one of inconvenience: in the morning she was supposed to catch a train to Frankfurt to make the flight home. Under ordinary circumstances, she would have felt exhilarated, and probably even enjoyed the nine hour trip north, but her rapidly approaching symptoms rendered this somewhat doubtable this time round.
Feeling her stomach knot, she slipped out of bed taking extra care not to rouse her sleeping friend. ‘She could handle it this time’ she told herself. ‘She didn’t need to worry Cleo like last time.’ It wasn’t that she didn’t want the fuss. In fact at the moment it was that maternal care she most craved. It was that she’d stress Cleo, who in turn would pick up the phone and stress her parents. She reached the bathroom with no problems, and leaning over, emptied the minimal contents of her stomach into the toilet bowl. She hadn’t dined that night, feeling too nauseous to keep anything down and for a short moment was unconsciously glad of that fact: this time it was only bile and essential minerals she was loosing, not the calzone and coffee she’d enjoyed at lunch. Standing up, she staggered to the sink to rinse out her mouth and freshen up. Looking in the mirror she watched motionless as the gaunt reflection before her slowly blurred and wavered before disappearing out the bottom of the mirror.
The crash of her limp frame against the door was enough that when she regained consciousness, Cleo knelt beside her, with the phone in one hand.
No comments:

Email ThisBlogThis!Share to TwitterShare to FacebookShare to Pinterest
Labels: Sketches

The Marbles of Elgin

The British Museum is a treasure trove spanning across cultures and centuries and it can take weeks to visit even a half of the rooms, let alone come to grips with the stories therein. Here is the story of British trade routes and agreements, British exploration and British colonisation. 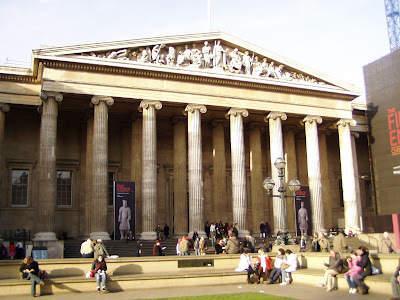 However I have a favourite room: that of the Elgin Marbles.