No Cheese, and an Abundance of Jam (Marmalade Pannacotta)

My family came over for dinner this week and so as per normal, I decided to cook up a storm. Dinner wasn't a problem, it never is. Once the Osso Bucco was decided upon, the sides quickly fell into place.
What was difficult though was the dessert. Usually I have a hundred and one recipes for lemon cake or tea biscuits or chocolate raspberry brownie to fall back on but at this particular point in time I was still trying to abide by a relatively carb-free eating plan. This basically means no normal carbs (including flour) and no sucrose, glucose, fructose... whatever natural sweetener you usually use in baking.

As a result I've been indulging in unsweetened cheesecakes on a purely nutty base. Normally this wouldn't be a problem, the lemon or chocolate cheesecake are both moreish and eaten at the most unsavoury of hours. However, my aunt is a decidedly non-cheese eater. This extends beyond your normal 'smelly' cheese  to encompass everything, including  Philadelphia and, strangely enough, Marscapone.

With a disastrously limited repertoire I fell back upon my other current favourite: pannacotta. Pannacotta translates as cooked cream but is even simpler than that; realistically it is just flavoured cream set with gelatine: a sort of custard devoid of eggs and the need to bake it in a bain marie for hours. Pannacotta can be fiddly; too much gelatine and the texture becomes rubbery and the cream grainy, too little and it hasn't set enough to unmould for presentation purposes. However this ratio appears to work beautifully:

1 tsp of gelatine powder dissolved in 1 tbsp of warm water, mixed into 1 cup of scalded cream.

I try to flavour each pannacotta with solid ingredients that won't impinge upon the setting ratio (anything too liquid-y will still set, but will produce textured layers when you unmould them). Looking for something unusual that would cut through the richness of the cream, I was rummaging through our pantry and discovered a jar of home-made marmalade. We always have too much jam in this house, and no occasion to eat it, so this felt like the perfect solution, killing two birds with one stone.

Mixing a few tablespoons into the cream to give it a taste, I also spooned a tablespoon into the bottom of each ramekin. What this meant was that when it came time to serving, as the ramekin was gently heated to loosen the pannacotta, the marmalade would melt and become the sauce for the unmoulded pannacotta.

Mix the gelatine in the warm water and set aside
Heat the cream on the stove until it starts to bubble around the edged. Do not let it boil
Add the gelatine mixture and 1 tbsp of jam to the cream. Mix well
Spoon 1 tbsp of jam into each of the ramekins intended to be filled. (sorry forgotten numbers)
Pour the cream mixture on top.
Allow to set in the fridge for approximately four hours or overnight

Carefully hold the base of each ramekin into a bowl of boiling water. As the pannacotta unmoulds it will start to slide around.
Upend onto a plate to serve. The jam should have melted slightly. Pour on top of the pannacotta. If it is still solid, hold it in the hot water for a little longer.

Unfortunately I only have a picture of a blue cheese pannacotta to illustrate this post. Will rectify it when I can. 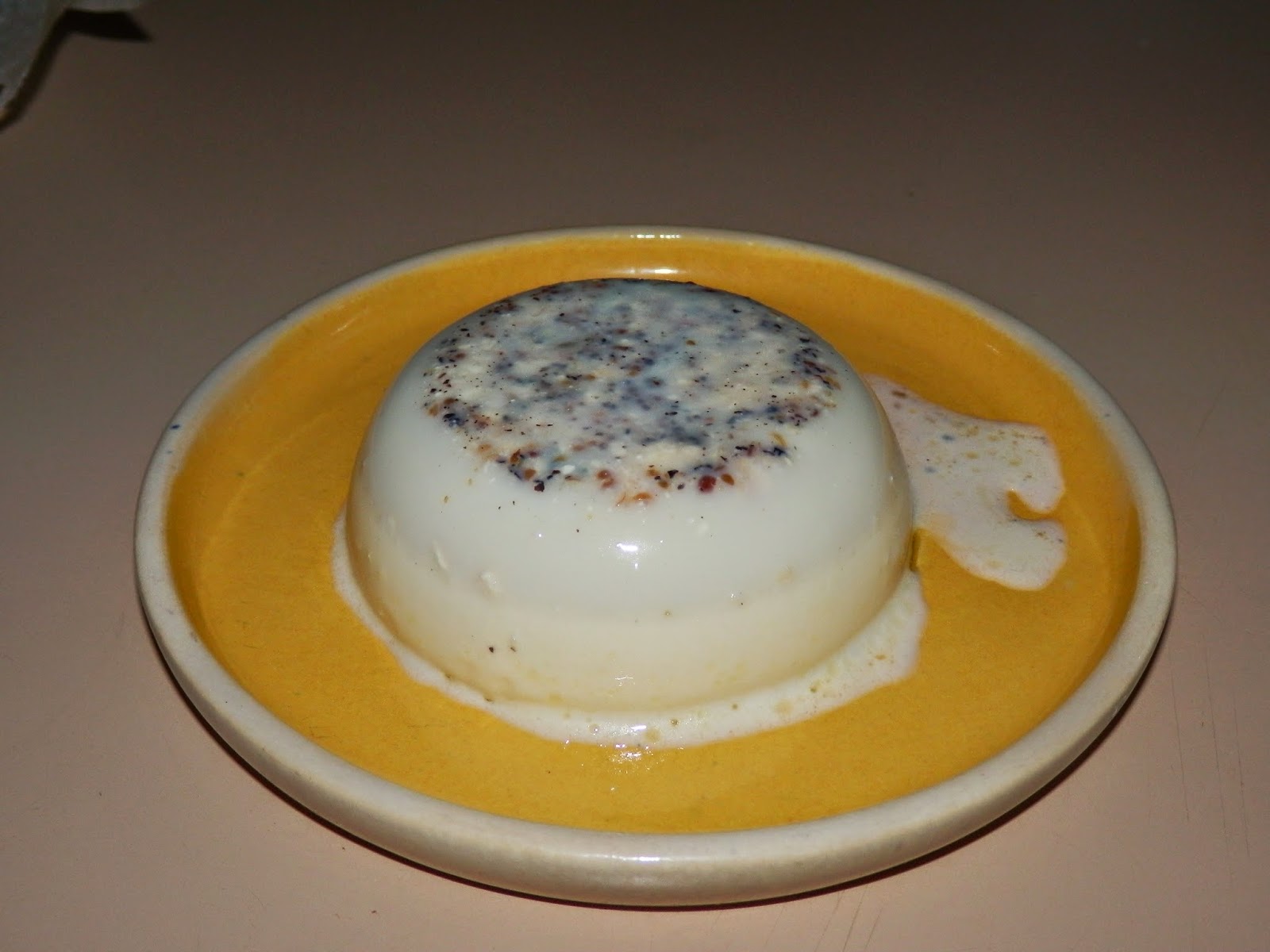