This afternoon, as part of the Heritage Festival on in Perth at the moment, my mother and I traipsed down to Hamilton Hill to visit the Azelia Ley Homestead Museum. It is a beautiful house situated within luscious parklands and it is notable how much time and energy and love has gone into restoring this house for the public's understanding.

Mum and I were interested in the history of the place, the history of one of the founding families of Fremantle, but of more interest was the family rumour of our own personal connections with some of the artefacts preserved therein.
Perhaps I should explain; my mother's uncle was involved with the City of Cockburn's council and when they were assembling the collection at Azelia Ley Homestead it is said within the family that he raided his late mother's linens for suitable pieces. It was known that these pieces had no connection with the house but that instead they were of a suitable age to improve the understanding of the house and times in which it was occupied.

However, saying that, the story also goes that a motivating factor for the use of his mother's possessions was that her initials matched those of the unmarried Azelia Ley, thereby making my great-grandmother's trousseau appear as though it instead had belonged to Azelia. This wouldn't be a problem if the donation were acknowledged somewhere within the museum. Instead the ladies manning the house saw the initials and immediately assumed what my great uncle had wanted them to assume: that these pillow cases were a part of Azelia Manning's trousseau for her marriage to Jack Ley. This is despite their familiarity to my mother (who has never entered the Azelia Ley Homestead museum before), and the fact that the pillow cases are classic european pillow cases and therefore highly unlikely to have belonged to an Australian girl of English heritage. They are far more likely to have belonged to a Maltese woman from Alexandria who insisted upon speaking Italian. 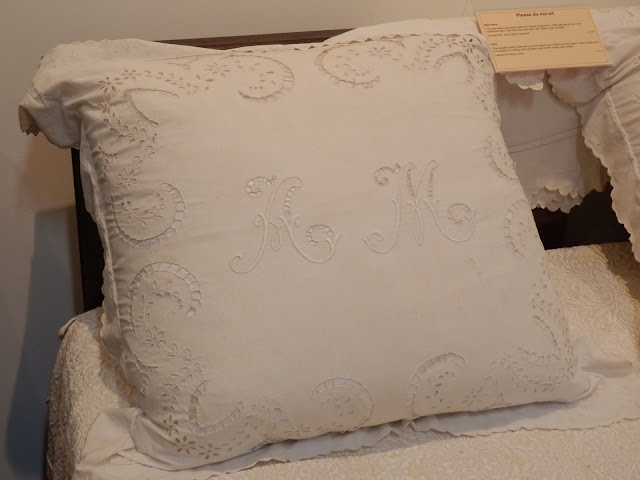 Sadly what this means is not just that these pillowcases have acquired a history incongruous with their real history  but that because of their presence within the Azelia Ley collection they have lost their true history to all but a small handful of family members who remember the donation and the reactions it caused between brothers. The ladies at the house voiced this concern, asking whether they should be remembering and conveying the true providence of these pieces, for I fear my mother and I did unintentionally confuse them as she recognised various items from her own childhood. But to offset this loss of history, my great grandmother's pillow cases are being used to educate , to increase our understanding of the history of the city in which we live, and hopefully to preserve some of this history before it disappears completely.